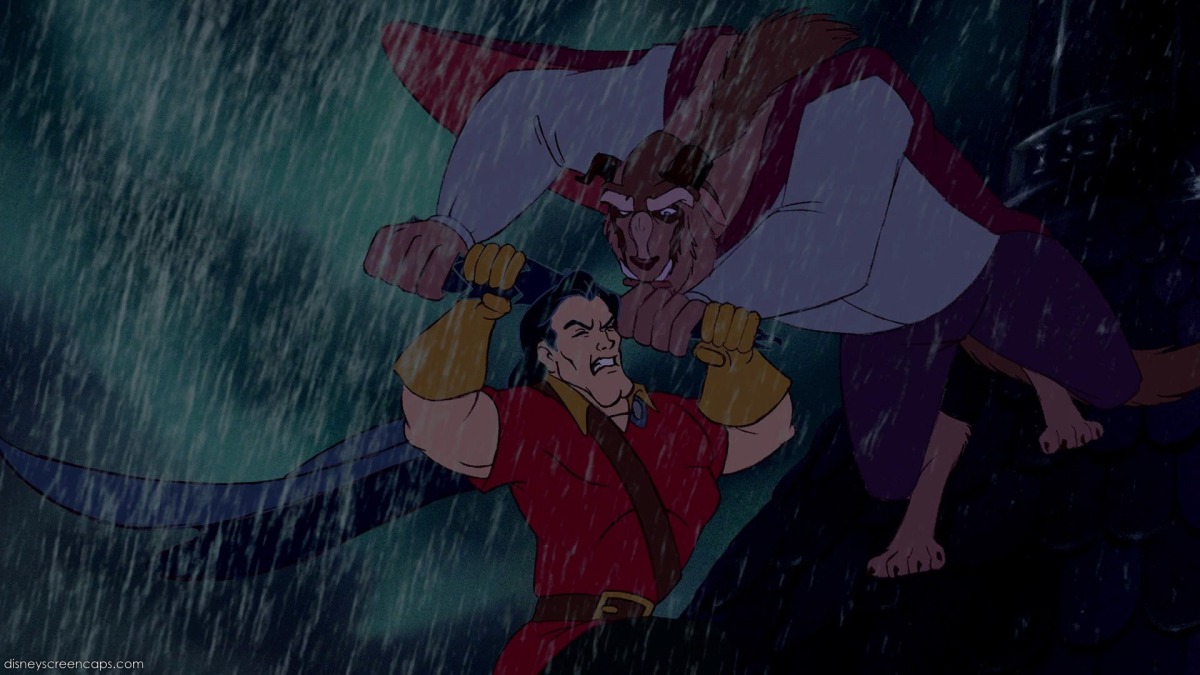 The first time I watched Beauty and the Beast I must have been five or six-years-old. I was enchanted by the music, Belle’s passion for books, and I loved Beast. I knew Gaston was the bad guy, he was the villain. I thought that the moral of the story was to love someone based on who they were on the inside vs. what they looked like on the outside. Gaston was ugly on the inside and beautiful on the outside. Beast was ugly on the outside and beautiful on the inside. (I understand that these are objective statements, but I think we can agree that this was the allegory that Disney was going for when they created these characters.)

Watching the movie as an adult, the enchantment was still there, but it was accompanied by a critical eye. I was disturbed by the scene where Gaston proposes to Belle. Gaston stalked Belle across her living room and she made a point to keep furniture between the two of them. He pinned her against the front door and she squirms away to avoid his kiss. She was at his mercy. She was his prisoner.

While watching that scene as an adult, I realized that even my six-year-old self empathized with Belle. This scene made me uncomfortable as a young girl. I felt Belle’s fear and vulnerability in that moment.

I then scrutinized Beast’s behavior and I thought why is he any better? Why did I not fear Beast the same way I feared Gaston? I had every reason to dislike him as much as I did Gaston. Beast imprisons kind, little old Maurice. He then keeps Belle prisoner. He shouts at her and bosses her around.

Beast and Gaston were both really quite awful. They both wanted Belle for different selfish reasons. Gaston wanted a beautiful wife. Beast wanted to use her to break the spell. Beast was Gaston and Gaston was Beast.

My interpretation and the moral of Beauty and the Beast just went up in flames. The foundation of my childhood just crumbled. Both “men” were ugly.

Well, we all know that Beast softens. He protected her from the wolves, gave her the most envy-inducing library, and he waltzed her around a stunning ballroom, but don’t forget that she was still his prisoner while all of this took place. (Belle may have showed signs of Stockholm syndrome when she didn’t jump on Phillip and ride away after the Beast was down after the wolf fight.)

So what is the difference between Gaston and Beast? What is the actual moral of the story? REDEMPTION.

The major shift towards Beast’s redemption happened when he set Belle free and  sacrificed the chance to break the spell and regain his former life.

The second major act that showed his character change was the fight scene between Gaston and Beast. The fight was really an allegory to Beast’s inner struggle. By showing mercy to Gaston, he proved his redemption again. When Gaston falls to his death that same selfish part of Beast died with him. That was when Belle realized her love and the spell was broken.

I would love to hear your thoughts and comments on Beauty and the Beast and what the movie meant to you.

I love reading about everything. I'm not a book snob. Lately I have been "reading" a lot of picture books to my toddler and baby. In my past life before motherhood, I was a professional technical editor and writer. View all posts by Rachel McKee

7 thoughts on “The Difference Between Gaston And Beast”

Rachel McKee, ©Illuminated Literation, 2016. Unauthorized use and/or duplication of this material without permission from the author and/or owner is strictly prohibited. Excerpts, links, and photos may be used, provided that full and clear credit is given to Rachel McKee and Illuminated Literation. With appropriate and specific direction to the original content.
Loading Comments...
Comment
×
%d bloggers like this: